As I have named my practice ‘Indigo Light’, this feels like a good moment to talk about the concepts behind this name, along with some of my own direct experiences related to it.

Indigo is the colour of the sixth chakra – the third eye chakra, and its associations have not only struck a chord with me during my studies so far, but also because I have had a few experiences with my own third eye recently.

And, as I have come to realise more fully than ever during this journey, we are all composed of ‘light’; we are light beings; manifestations of source, and our purpose on this physical plane is to uncover our natural state of Being.

Both of these concepts have deeply resonated with me, both personally and professionally, moreso than ever during the past year.

Here is some insight in to what I’ve learned and come to know about the third eye chakra so far; 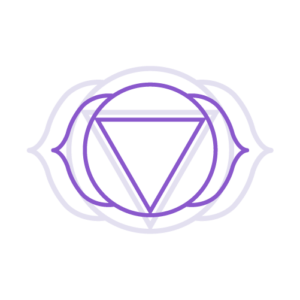 – the third eye is the 6th chakra, located in between the throat chakra and crown chakra

– the third eye chakra is associated with visual imagination, intuition and psychic abilities.  If you have an active third eye, you may experience visions, strong ‘knowing’ feelings or in some cases, psychic experiences

– all chakras are linked to different glands in the physical body. The third eye chakra is linked to the pineal gland, which is often referred to as ‘the seat of the soul’

– each of the chakras develop in seven year cycles, starting with the root chakra which develops between the ages 0-7. The third eye is said to be dominant between the ages of 36 and 42 years old.

“To see implies a far deeper perception than to look” – Anodea Judith.

There are certain techniques which can be carried out to enhance intuitive abilities and stimulate the third eye.

– yogic postures and meditations related to the third eye chakra

– use of crystals, including lapis lazuli and quartz, which can be used during meditation or placed on the brow area

When working with any of the upper chakras, it is always important to remember to ground your energies, otherwise it is likely that you will be left feeling light-headed, with scattered thoughts and an inability to manifest or put in to practice your plans and ideas. Some simple grounding techniques include wearing or holding grounding stones (untumbled garnet is my favourite), visualisations which encourage body awareness and connection to the root of the earth itself, as well as basic activities like walking barefoot on the ground, wherever possible.

Conversely, a person I was chatting with online recently pointed out that the central column (the seven chakras, running from root to crown) is only one part of this story. We have dozens more subtle energy points and overlaying systems throughout our energy field. It is very useful to understand how our chakras work and shine the light of awareness on blockages and their various manifestations (such as ill health or negative emotional states), but at the same time there is no need to force or pursue spiritual development. The key is to let our transcendence develop of its own accord (I always use the phrase ‘we cannot think our way there!’), allowing it to integrate naturally, without words or labels.

Working with your own third eye could be as simple as deciding to honour your intuition more fully, which would allow this chakra to function efficiently, thus contributing to the overall flow of your energy system.

Experiencing my own third eye

My first encounter with my third eye, the day I would say it was fully ‘activated’, was when I received my second Reiki attunements. Up until that point I hadn’t experienced any visions or seen colours at all (when treating clients or during self-treatments) and I didn’t have any expectations ahead of the attunement. I had my eyes closed and during the process I suddenly saw a huge, dark blue eye behind my physical eyes. It was very vivid and detailed and seemed to pulsate. I didn’t feel afraid or shocked, just mildly surprised.

Prior to this, there had been a few clairaudient experiences and also two incredibly compelling experiences of other realms. Although each incident changed my path significantly, at the time, I wasn’t fully ready to acknowledge it; I would put it down to some ‘glitch’ in the physical universe, or put it in a box marked ‘things I’m not quite ready for yet’ in case it should interrupt every day life.

What has been more consistent nowadays is a heightened sense of intuition and sensitivity. I sometimes see my third eye during meditation practice, but I have no idea how to control it, yet. As I walk this path, however, I am coming to realise that perhaps I don’t need to know. The ‘I’ that needs to know how to control it, is my human ego. And when something unusual occurs, my higher self has learned not to fixate on it too much or try to acquire something from it, but just to quietly smile and bow to the experience itself.

The Indigo Light logo is based on the symbol for the third eye chakra, or Ajna (Sanskrit ~ आज्ञा ).

The full symbol includes two white petals, said to represent the world of manifest and unmanifest and also transcendence of space and time, concepts that we become more attuned to as this chakra awakens. The central area contains a downward facing triangle displaying the ‘Om’ symbol, as well as an image of Hakini Shakti, the primordial feminine cosmic force, seated on a lotus, with the crescent moon and a dot, representing manifestation, above her. 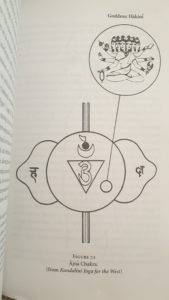 The path to self-actualization

A few days ago I was discussing the chakra system with a friend, and we mentioned its comparable features to Maslow’s hierarchy of human needs.

In this instance, the upper chakras (including the third eye), would correlate with western concepts around the theme of self-actualization and reaching our highest potential as humans. This includes conscious awareness, the ability to appreciate beauty and harmony, and development of creative insight.

As Eckhart Tolle and other spiritual teachers discuss in their writings, universal consciousness is evolving.

More and more people are waking up to the fact that they are, in fact, ‘spiritual beings having a physical experience’ (and not the other way around) and that, as we grow and evolve, our potential becomes boundless.

This energy shift is happening on a collective scale and will affect humanity as a whole, whether individuals are currently aware of it or not. People, populations and institutions are gradually shedding old paradigms and moving towards higher expressions of conscious awareness.

As Eckhart Tolle asks in ‘A New Earth’, “can human beings lose the density of their conditioned mind structures and become like crystals or precision stones, so to speak, transparent to the light of consciousness?”

Although to some degree, our work in raising our vibration and ascending towards higher levels of consciousness transcends the astral body and the chakra system, I imagine that the highly evolved spiritual beings of the (near) future would most certainly have a very developed and active third eye.